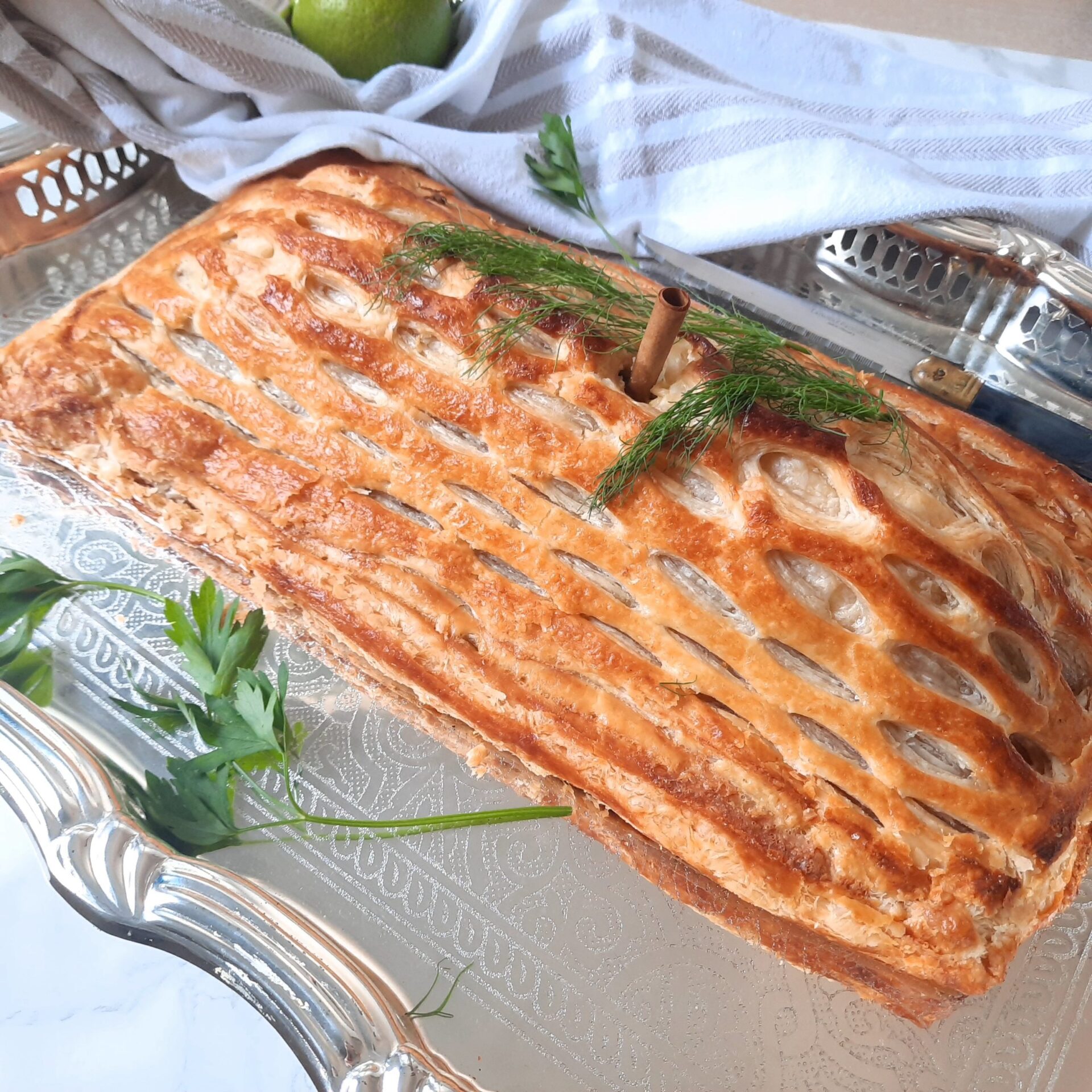 A coulibiac is a Russian Pirog usually made with puff pastry filled with salmon, rice, hard-boiled eggs, mushrooms, onions, and dill. It’s distinguishable by its oval loaf style shape and complex filling stacked in series and separated by thin pancakes to prevent mixing. This recipe makes the perfect dish to impress your guest, it demands time, patience, and enthusiasm but it’s definitely worth it and you’ll end with a heavenly dish.

A coulibiac or koulibiak (from Russian: кулебя́ка – koulébiáka) is a traditional popular holiday dish from Russia. It’s a type of Pirog usually filled with salmon or sturgeon, rice or buckwheat, hard-boiled eggs, mushrooms, onions, and dill. The pie is baked in a pastry shell (puff pastry or brioche) and served in slices. It’s also distinguished by a more elongated, oval, and more convex shape, similar to a loaf.

There’re many versions for the origin of the name. It is widely believed that the name comes from the German Kohlgebäck – “baked (in dough) cabbage”. Another version is based on the relationship with the Finnish Kala – “fish”. One of the versions believes that the kulebyak came from kolobok, that is, small bread. According to another version, the name of the pie kulebyaka comes from the Polish word kula – ball, obviously associating the name with a rounded shape. According to a last version, the term kulebyaka comes from the verb kulebyachit, that is, “play with your hands, dump, crush, bend and fold, cook and mold.” In fact, this verb fully covers all the processes that occur during the preparation of the pie.

The origins of the coulibiac are little known and go back as far as the 12th, 16th, or 17th centuries since different sources differ in determining the date of the first mention of coulibiacs. It was a dish that was destined to all sectors of the population – from peasants and artisans to the boyars and kings. The original Old Russian coulibiacs were prepared exclusively from yeast dough, with several layers of minced meat – from all sorts of meat, cabbage, buckwheat porridge, eggs, dried and boiled fish, mushrooms, onions, etc.

In the 19th century, French culinary specialists (The most famous were Moscow kulebyaks) who worked in Russia contributed to spreading its fame internationally. They adapted their recipe to the requirements of “high-class cooking” by preparing it from the more delicate “French” dough, mushrooms, rice, salmon and etc. At the beginning of the 20th century, the famous French chef and culinary author Auguste Escoffier imported the recipe to France and incorporated it into his culinary works. This recipe, which has since been spread all over the world, has become part of the cuisine of the Eastern European countries and of Israeli cuisine.

For the dough, the traditional recipe is made from yeast dough, however, it is permissible to use a puff pastry or unleavened dough. The thickness depends on the type of dough: it should not be too thick (so that the dough after baking does not exceed the filling volume). In our recipe, we’ve used puff pastry.

In the traditional recipe, it’s recommended to bake thin fresh crepes or pancakes that will separate the different fillings from each other, without fusing their taste. In our recipe, we decided to omit this step, since it’s more time consuming but feel free to do it if you want.

The traditional stuffing is made with rice, salmon (or sturgeon), hard-boiled eggs, mushrooms, onions, and is flavored with dill. In our recipe, we’ve decided to use use the same ingredients to keep it authentic as much as possible.

The filling should be pre-cooked, semi-cooked, or cooked (depending on the density of the ingredients) and chopped to the state of gruel or paste. This is necessary so that the ingredients of the filling, differing in initial density, are as close as possible in their state and at the same time retain their shape when it is cut into slices.

Finally, a coulibiac demands time, patience, and enthusiasm but it’s definitely worth it and you’ll end with a heavenly dish.

The coulibiac is a versatile dish and depending on the type of dough and the filling, it can be served as an appetizer, as a main dish, or as an addition to it. It is served cut into slices so that all the fillings are clearly distingueshed at the same time.

If it is prepared as a main, independent dish, then it is served with ghee, sour cream, or another suitable sauce. Otherwise, it can be served with soups or broths, traditionally borscht (beetroots soup). 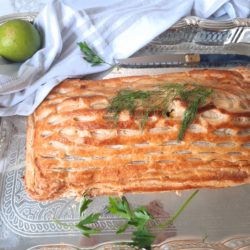