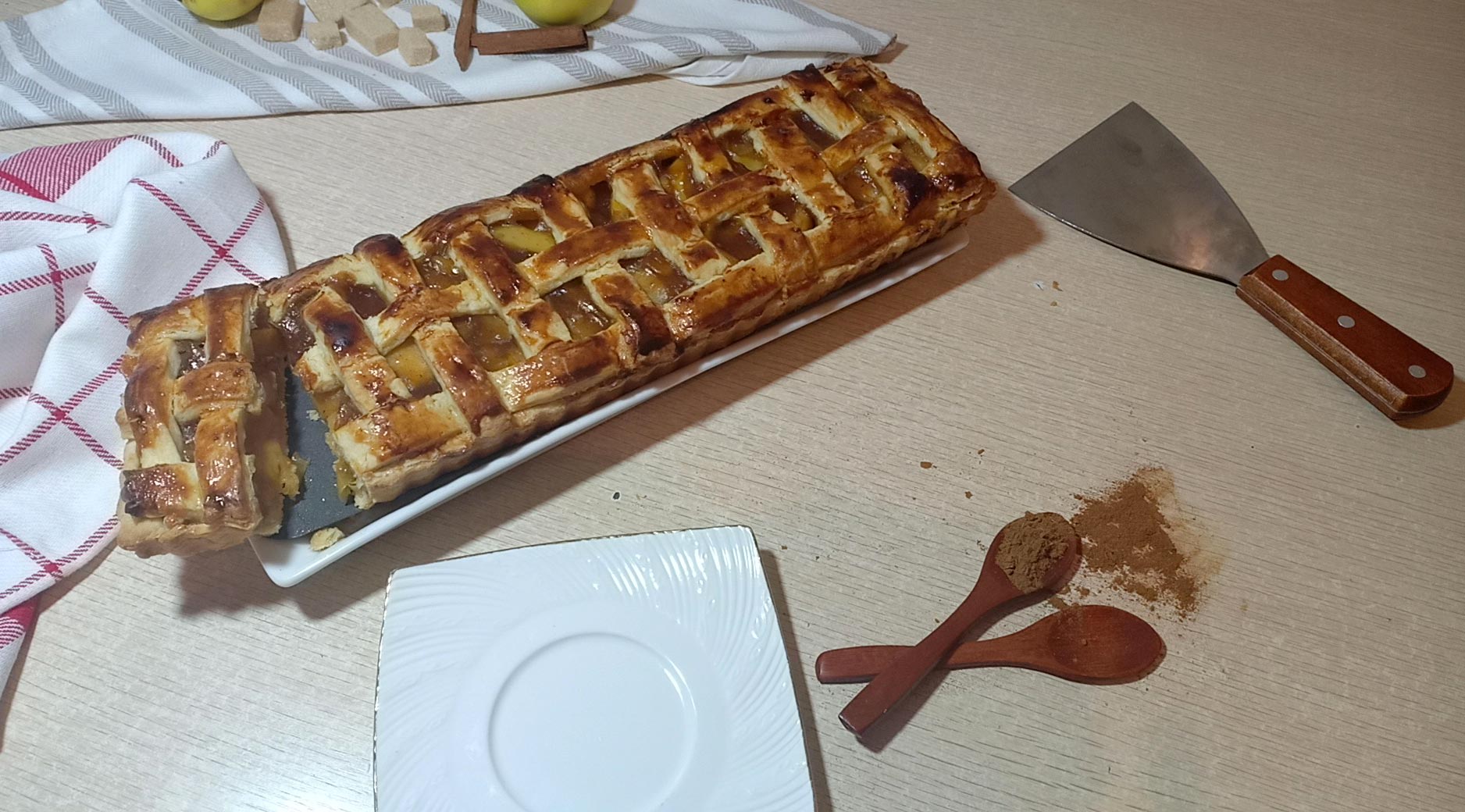 Making an apple pie from scratch is so much easier than you might think. This classic recipe of Apple Pie combines the sweet and tender flavors of baked apples with a flaky, buttery crust. It can be served with fresh vanilla ice cream, whipped topping or even just on its own.

An apple pie is a pie or a tart, in which the principal filling ingredient is apple. The pastry is generally used top-and-bottom, making it a double-crust pie; the upper crust may be a circular or a pastry lattice woven of crosswise strips.

The apple pie is a longstanding symbol of America, but the dessert didn’t actually come from America, and neither did the apples. This dessert’s popularity amongst so many cultures may be another reason apple pie has become a staple of America because the U.S. is where so many cultures blend together. In 1697, America saw the mention of its first apple pie in Allen Metcalf’s book. Believed to be brought over by Swedish, Dutch, and British immigrants, apple pie quickly became a part of the American culinary repertoire.

The first written apple pie recipe goes back to England around 1381. It was printed by Geoffrey Chaucer and included apples, figs, raisins, pears, and a pastry shell (but no sugar). Today, the English style incorporates generous layers of sweetened slices of, usually, Bramley apple; layered into a dome shape to allow for downward shrinkage, and thus avoid a saggy middle, then topped with butter or lard shortcrust pastry, and baked until the apple filling is cooked.

Evidence of Dutch apple pies goes back to the 1600s. In addition to apples, Dutch pies include lemon and several spices like cardamom, ginger, cinnamon, nutmeg, clove… and sometimes raisins and icing. This early recipe was a simple one, requiring only a standard pie crust, slices of especially soft apples with their skin and seeds removed. It was then baked in a typical Dutch oven.

The Tarte Tatin, or French version of apple pie, was created by accident by hotel owner Stéphanie Tatin when she was trying to make a traditional apple pie in the 1880s. Instead of it being right side up with crust on top and bottom, it actually is upside down, with the fruit being caramelized.

We’ve prepared of course our own short-crust pastry since the dough takes just 10 minutes to make, so resist the temptation to buy that pre-made crust from the refrigerator case. Homemade pastry always tastes better. Another tip is to make it the day before. You can even roll it out, line the tart pan and keep it frozen until you’re ready to bake.

During the preparation of the pastry, we’ve incorporated the butter into the flour by hand but you can use a food processor if you want, just pulse with longer pulses, on and off, until mixture turns pale yellow and looks like crumbs. Also, don’t knead the dough, just bring pieces together to form a tight ball of dough. It will keep the dough from shrinking back during baking. After adding the egg, if the dough is dry and can’t be formed into a ball, sprinkle up to a tablespoon or more of cold water over the mixture.

To prevent shrinking of the crust during the cooking you can refrigerate the dough 10-15 minutes before placing it into the oven. 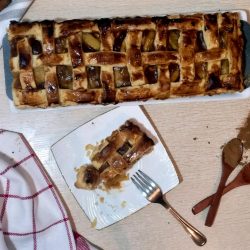 Making an apple pie from scratch is so much easier than you might think. This classic recipe of Apple Pie combines the sweet and tender flavors of baked apples with a flaky, buttery crust. It can be served with fresh vanilla ice cream, whipped topping or even just on its own.
Print Recipe Pin Recipe
Prep Time 15 mins
Cook Time 1 hr
Total Time 1 hr 15 mins
Course Dessert, Pies
Cuisine American
Servings 8 parts
Calories 208 kcal