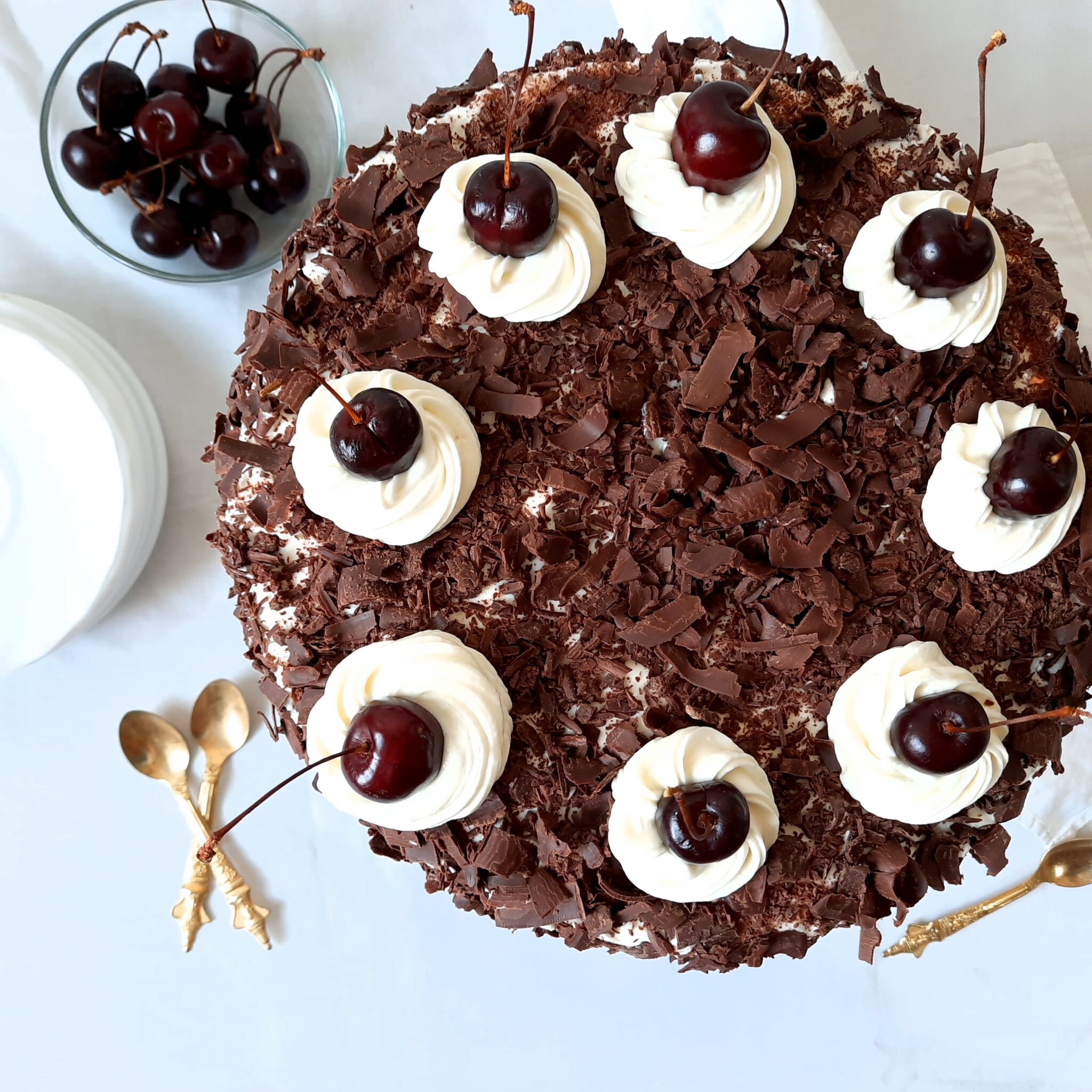 Tasted all over the world, the Black Forest is a famous German pastry: the Schwarzwälder Kirschtorte, literally translated as “Black Forest cherry cake”.

It’s made with chocolate sponge cake layers filled with whipped cream and cherries. This delicious cake recipe is completely made from scratch and perfect for special occasions.

The traditional costume of the inhabitants of the Black Forest consists of black, red, and white, colors that can be found in the Black Forest (Schwarzwälder Kirschtorte): red cherries, white whipped cream, and dark cocoa sponge cake. It is not certain, however, that the name of the cake really relates to this traditional costume, whose hat surmounted by large red pompoms is called Bollenhut.

Other theories exist as to its origin such as:

A young pastry chef by the name of Josef Keller serves, in a pastry shop in Bad Godesberg, a dessert consisting of cherries with kirsch, chocolate, and whipped cream. The pastry chef has the idea of adding a sponge cake, when his apprentices express the wish to bring the dessert home, thus facilitating its transport and becoming the basis of the cake that we know.

It is in Josef Keller’s recipe book, transmitted to his apprentice, that the original recipe for the Schwarzwälder Kirsch, the now famous Black Forest cake, is recorded.

In the thirties, the cake spread throughout Germany, it was served in the best pastry shops in Berlin and the big cities. But it was only after the Second World War, or even the 1970s, that it really took off in the conquest of the world, to such an extent that it is now declined in all varieties, from yogurts and other industrial desserts, even ice cream, …

The black forest is generally composed of a chocolate sponge cake, whipped cream, and a cherry filling. In the original recipe, this cake is soaked in kirsch which we replaced with cherry syrup.

We’ve also used a mixture of flour and cornstarch, to have a melting and airy result. If you do not have cornstarch, you can of course use only flour.

The cake can be baked, cooled, and covered tightly at room temperature overnight.

Chantilly cream is one of the fundamental elements of a good black forest! It must be perfectly risen to stand, to support the sponge cake on top. it is important to use the whole liquid cream. Place the whole liquid cream in the freezer for a few minutes (15 minutes) since it must be very cold for whipping it. Here, we only sweetened our whipped cream. You can add some kirch to flavor it if you really love it.

If cherries aren’t in the season, you can replace them with canned cherries. To make this cake, it is advisable to use Amarena cherries, these are large black cherries, quite firm and very fleshy. They are usually sold in syrup and must be marinated in kirsch. You can also use Morello cherries or Montmorenc cherries.

It’s better to make this dessert at least 4 hours ahead or even overnight, for flavors to develop. 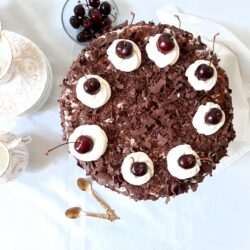 black forest cake cherries chocolate dessert
You May Also Like