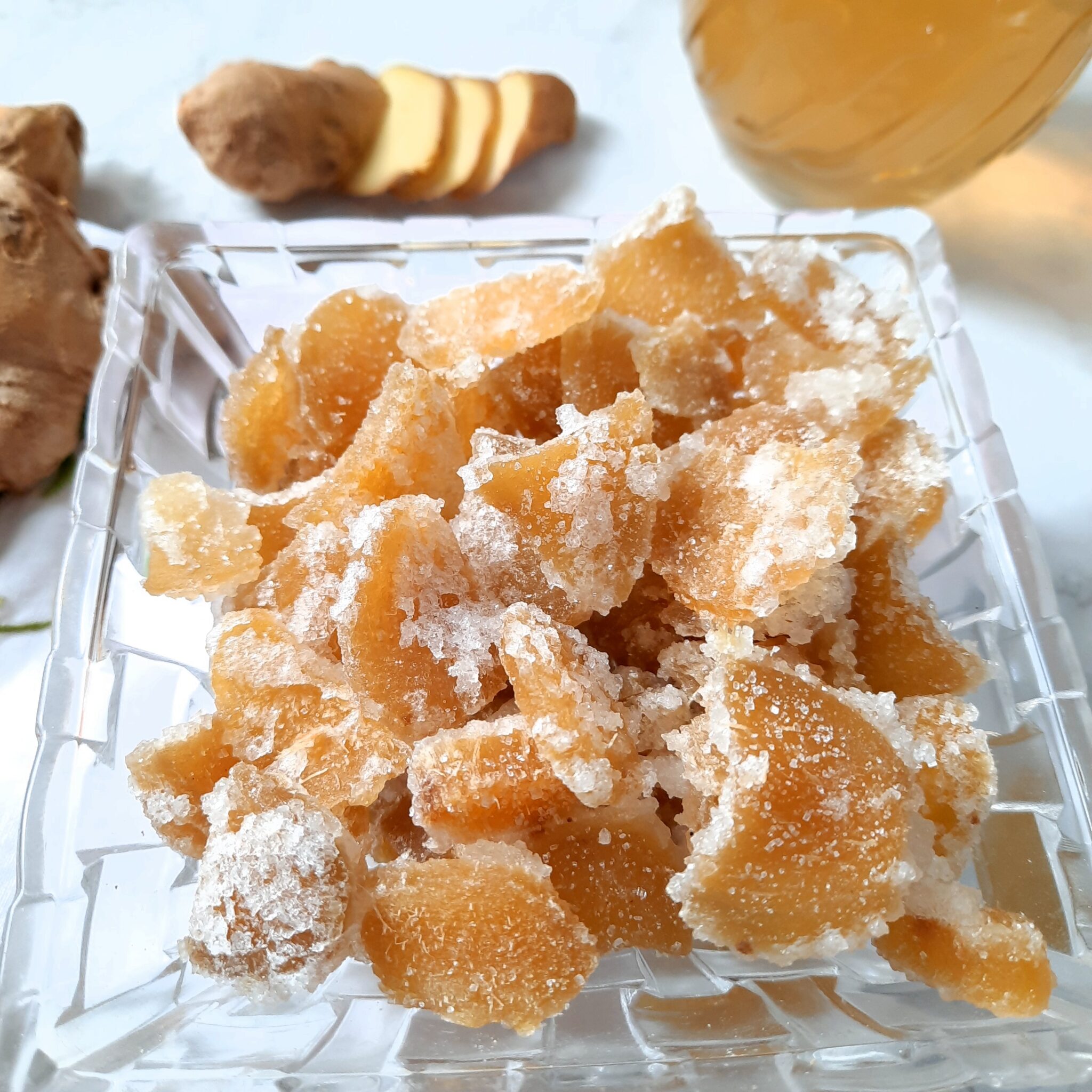 Crystallized Ginger (also called Candied Ginger or Glace Ginger) is a delicious exotic treat with a pungent and spicy-sweet flavor. It tastes spicy, lemony, and sweet at the same time with a familiar sweetness before the heat takes over. Identifiable by its yellowish color, this treat can be easily made at home to enjoy with baked goods or an everyday meal.

Ginger (Zingiber officinale) is a flowering plant whose rhizome, ginger root or ginger, is widely used as a spice and folk medicine. It is from the family Zingiberaceae and is closely related to galangal, turmeric, and cardamom. Technically speaking, ginger is a rhizome and not a root. Rhizomes are plant stem that produces roots below ground and produces shoots above the ground.

The word ginger comes a long way, but its origin goes back to the Sanskrit word “srngaveram” (pronounced singabera) which means “shaped like a deer’s antlers” or “horn body” and describes its root. After that, the word became gingiber in late Latin. Then Old English picked it up and made it gingifer, which finally became what we know today as ginger.

Ginger first appeared in the southern parts of ancient China. From there, it spread to India, Maluku Islands (so-called Spice Islands), rest of the Asia, and West Africa. Europe saw ginger for the first time in the 1st century when the ancient Romans traded with India. When Rome fell, Europe forgot about ginger until Marco Polo brought it again from his travel to the East. In the Middle Ages, ginger was very pricy as half a kilogram of ginger was the same as of one sheep. In the 15th century, with the rediscovery of the New World, Ginger was brought to the Caribbean where it started to grow with ease. Today, India is the greatest producer of ginger in the world.

Candied fruits are a centuries-old delicacy in most of Asia, but the blend of sugar and fruit is also well-known throughout the world. Crystallized ginger was spoken of in the Jewish Talmud, and even Henry VIII suggested it as a remedy against the plague. Urban legend has some folks saying that it helped alleviate the symptoms of motion sickness on boats. Ginger, whether crystallized or not, is also considered a good remedy for nausea. Today, it is thought to be a strong antioxidant to prevent cancers ranging from gastrointestinal to skin, and as an antimicrobial against E. coli.

Typically, to make crystallized ginger, young ginger roots are harvested, washed, peeled, hand-cut, and water blanched. The root pieces are then dipped in a cane sugar (or fruit juice) solution, rolled in cane sugar, and placed in an oven. Young ginger rhizomes are the most suitable for this process since they are softer and have a milder flavor.

Here are some tips to prepare crystallized ginger:

Candied ginger is most frequently used in desserts and baked goods or as an after-dinner snack or with cups of tea. It is used in holiday recipes such as pies, puddings, or to decorate the top of cakes.

It can also be used as a condiment with curry, minced and served with chutney, alongside cream cheese, and with fruit desserts.

Candied ginger is sometimes mixed with soy sauce to use on vegetables and egg rolls, and can add an extra flavor dimension to vanilla ice cream.

Crystallized Ginger (also called Candied Ginger or Glace Ginger) is a delicious exotic treat with a pungent and spicy-sweet flavor. It tastes spicy, citrusy, and sweet at the same time with a familiar sweetness before the heat takes over. Identifiable by its yellowish color, this treat can be easily made at home to enjoy with baked goods or an everyday meal.
Print Recipe
Prep Time 30 mins
Cook Time 1 hr 30 mins
Resting Time 1 d 8 hrs
Total Time 1 d 10 hrs
Course Candy, Side Dish, Treats
Servings 320 g
Calories 4.5 kcal


asian candy ginger side-dish treat
You May Also Like