The Spanish tortilla is, without a doubt, one of the greatest symbols of Spanish cuisine. The tortilla is a recipe with a long tradition. It’s a basic dish that can be served as a tapa or as the main course at dinner, made with elementary ingredients, and so simple in appearance.

Tortilla means Omelette in European Spanish. The word comes from the diminutive form of torta that represents its shape and means “small pancake” in the Spanish language.

However, its origin is not very clear, since the first omelets were known around 1519, both by the Spanish and by the Aztecs, and the potato was not known in Europe until the first Spanish conquistadors brought it from America. It was brought by Pizarro in 1537 as food for animals as food that came from the land was considered as a poorly valued culinary, having to wait until 200 years to be considered suitable for human consumption to alleviate the terrible famines of the time.

There are various theories as to the exact moment in which these two ingredients were mixed, creating the recipe for the Spanish omelet. All of them lead to the 19th century.

Initially, the origin of the recipe was known to be in Navarra in 1835 when General Tomás de Zumalacárregui during the siege of Bilbao in the First Carlist War was looking for a nutritious and cheap food for his troops to fight against the hunger of the time.

However, a recent study (2008) by Javier López Linaje, in his book “La patata en España. History and Agroecology of the Andean Tuber ”, locates the origin of the Spanish omelet in the Extremaduran town of Villanueva de la Serena (Badajoz) in 1798. As main actors, it places two landowners, Joseph de Tena Godoy and Malfeyto and the Marquis of Robledo who were looking for cheap and nutritious food that would alleviate the numerous famines that ravaged Europe in the late eighteenth century. In this sense, they invented a kind of ‘pancakes’. The biggest novelty was that it went through the pan instead of baking.

First, like we always say it. A perfect dish is made with best quality ingredients:

It is important to use a large dip non-stick pan to fry the potato and a smaller one to curdle and turn it.

The potatoes must be cut into discs of 1/8inches (15mm) thick and fried in abundant oil over medium-low heat so that it cooks well on the inside without burning the outside. It’s then, transferred to a strainer to remove the excess oil and allow it to warm before mixing with the beaten egg.  After that, you can season the mixture and let it sit for 5-10 minutes.

For the thickness of the tortilla, it depends on your taste but in general, the perfect thickness is around 1 inch (two centimeters).

To cook a perfect tortilla you have to find the intermediate cooking point: don’t overcook or undercook the eggs. It must be a little juicy inside without the eggs being raw. When the oil starts to smoke, pour the mixture, wait about 20-30 seconds, and move the pan so that the tortilla does not stick. Then, lower the heat and, with the help of a slotted spoon, set the edges to make the tortilla more aesthetic. After 2-4 minutes turn and repeat the operation.

A tortilla can be served warm or cold, as tapas in little squares or as the main course at dinner.

It can be served with good bread, which is the ideal accompaniment. However, the omelet gives enough scope to accompany it with any dish: cheese, fish, salads, fresh juicy tomatoes… 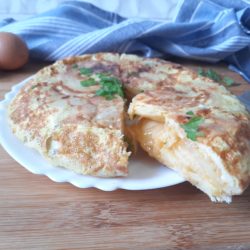 The Spanish tortilla is, without a doubt, one of the greatest symbols of Spanish cuisine. The tortilla is a recipe with a long tradition. It's a basic dish that can be served as a tapa or as the main course at dinner, made with elementary ingredients, and so simple in appearance.
Print Recipe Pin Recipe
Prep Time 20 mins
Cook Time 30 mins
Resting time 10 mins
Total Time 1 hr
Course Appetizer, Dinner, Fries, Lunch, Tapas
Cuisine Spanish
Servings 4 parts
Calories 321 kcal

Dinner eggs Lunch Potatoes Spanish Tapas
You May Also Like